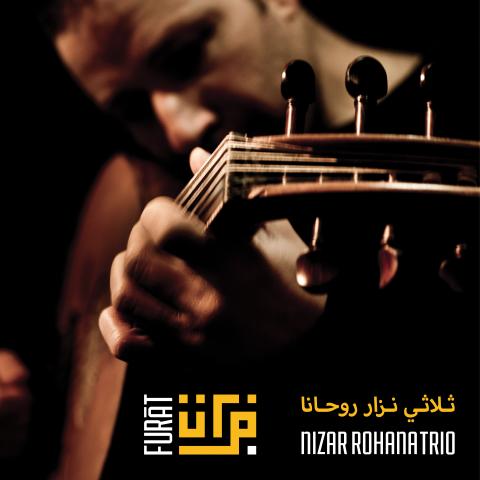 Ud player and composer Nizar Rohana announces the release of his second album Furāt (Euphrates) worldwide on Friday 15 April, composed by Rohana and performed by his trio comprising himself on ud, Matyas Szandai on double bass and Wassim Halal on percussion.

The album’s seven pieces continue along Rohana’s journey in exploring new possibilities for the ud instrument, where its idiomatic character is advanced through new compositions, fresh structures, melodies and expressions, combined with Rohana’s outstanding musicianship to create a vigorous contemporary sound.

The album opens with Madār Hijāz (An Orbit in Hijāz), where Rohana’s ud is heard taking the melody into orbits as it explores every nook and cranny in the maqam with spirited agility, accentuated by the contrapuntal interplay with Szandai’s jazz-influenced bass and Halal’s colorful accompaniment on percussions.

As well as pursuing flow as a predominant quality in composition, interpretation and arrangement throughout the album, Rohana’s work here delves into the textural elements of counterpoint, most apparent in the Mayādīn track, which contains a dynamic dialogue between the ud and the double bass.

Throughout the album, the double bass and the ud are heard in this dialogue, complementing each other to peacefully advance melodies in pursuit of the flowing quality, based on which the album was titled after the Euphrates river (Furāt in Arabic).

The civilizations and peoples that have lived along the river's course provide the themes for the song titles, from the Syrian city of Mayādīn to the ancient ruins of Al-Dālya, between the willow trees along its banks and through the Jūrjīnā rhythm cherished in Iraq.

All tracks in the album were composed and arranged by Rohana, except for Samā‘ī Muḥayyar composed by Tanburi Cemil Bey. Bishara Khell provided invaluable artistic supervision throughout the development of the work, which was recorded in August 2015 at Music Unit Studios in Paris. The album was recorded and mixed by Cyril Harrison, and mastered by Harris Newman (Grey Market Mastering).

Furāt (Euphrates) will be released worldwide on Friday 15 April via Loplop Records, on CD, streaming and digital download. This production was made possible with the support of the Arab Fund for Arts and Culture (AFAC). For more information contact Sarah El Miniawy - [email protected]