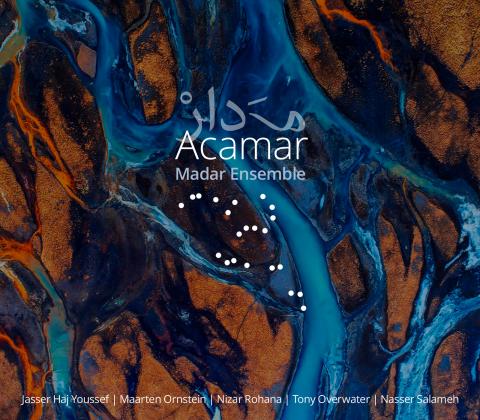 Madar Ensemble album Acamar is out now! Stream and order your copy from any of the following:

‘In orbit, you’re keyed up and aware of everything going on, every little noise, anything that may have special meaning because of where you are.’
– John Glenn

Madar(literally 'an orbit’) is the fruit of the musical friendship between the Palestinian ud player Nizar Rohana and Dutch bassist Tony Overwater. They invited three prominent musicians from the Arab world and the Netherlands: Tunisian violinist and viola d'amore player Jasser Haj Youssef; Jordanian percussionist Nasser Salameh and Dutch clarinet player Maarten Ornstein. With genuine curiosity for and understanding of each other’s musical language, they have come together with the purpose of creating something new, built on a deeply shared respect for the qualities of their various musical worlds.

Acamar, from the Arabic ākhir an-nahr meaning "the end of the river", is a star located in the constellation Eridanus, variously associated by ancient astronomers with rivers across the Mediterranean and MiddleEast, including the Nile, Po and Euphrates. The music in this album is inspired by the classical civilizations of Mesopotamia and the Mediterranean which relied in daily life on an understanding of the cosmos.

The album's 10 tracks include six original compositions and four improvisations. It was recorded and mixed by Fieke van der Hurk at Wisseloord Studios and was mastered by Frans de Rond.

The album was produced by Kepera Records and is distributed by Challenge Records International. This album was supported by The Arab Fund for Arts and Culture (AFAC).